MCDRN: A research network with a difference

How do you collaborate on co-operative research in a country that covers nearly 10 million square kilometres, extends from the Atlantic to the Pacific, is one of the most sparsely populated countries in the world and has more than 9,000 co-ops?  As Canada's Measuring the Co-operative Difference Research Network (MCDRN) has learned, you do it with good planning, organization and a strong commitment from both the co-operative movement and the academic community.

The MCDRN is a five-year initiative to study the economic, social and environmental impact of co-operatives. Funded by a Canadian government agency, the Social Sciences and Humanities Research Council, it was created i 2010 by the Canadian Co-operative Association (CCA) in partnership with several Canadian universities,  Led by Denyse Guy, Executive Director of Co-operatives and Mutuals Canada and Dr. Sonja Novkovic, economics professor at Saint Mary's University and Chair of the International Co-operative Alliance Committee on Co-operative Research, the Network is a model of how academics and co-op practitioners can work together to produce research that furthers the understanding of the co-operative model.

In its first four years of operation, the Network has launched some 20 different research projects on everything from co-operative education initiatives to the impact of credit unions on their communities. It has worked with co-ops to create practical tools for measuring co-op performance and has held webinars open to anyone with an interest in co-operatives.  It has launched a book -- a history of a Canadian consumer co-op that predates Rochdale -- and has issued an Interim Report outlining its research. And it publishes a regular newsletter highlighting co-op research across Canada and around the world.

To find out more about the MCDRN, go to www.cooperativedifference.coop. 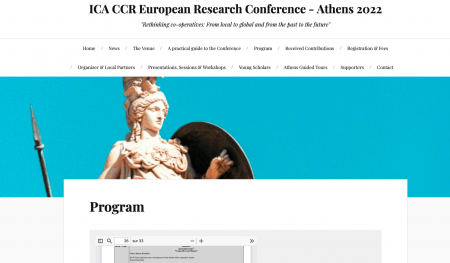 The ICA CCR European Research Conference 2022 will be…